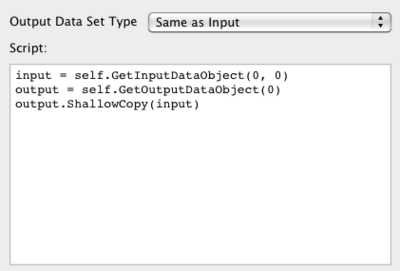 The Programmable Filter is a ParaView filter that processes one or more input datasets based on a Python script provided by the user. The parameters of the filter include the output data type, the script and a toggle that controls whether the input arrays are copied to the output. This chapter introduces the use of the Programmable Filter and gives a summary of the API available to the user.

Since the entire VTK API as well as any module that can be imported through Python is available through this filter, we can only skim the surface of what can be accomplished with this filter here. If you are not familiar with Python, we recommend first taking a look at one of the introductory guides such as the official Python Tutorial. If you are going to do any programming beyond the very basics, we recommend reading up on the VTK API. The VTK website has links to VTK books and online documentation. For reference, you may need to look at the VTK class documentation. There is also more information about the Programmable Filter and some good recipes on the ParaView Wiki (Python_Programmable_Filter).

Note: Since what is described here builds on some of the concepts introduced in the Python Calculator section, please read it first if you are not familiar with the Calculator.

If you leave the "Output Dataset Type" parameter in the default setting of "Same as Input," the Programmable Filter will copy the topology and geometry of the input to the output before calling your Python script. Therefore, if you Apply the filter without filling the script, you should see a copy of the input without any of its arrays in the output. If you also check the Copy Arrays option, the output will have all of the input arrays. This behavior allows you to focus on creating new arrays without worrying about the mesh.

Create a Sphere source and then apply the Programmable Filter and use the following script.

This should create a sphere with an array called "Normals_x". There a few things to note here:

Start with creating a new instance of vtkPoints:

vtkPoints is a data structure that VTK uses to store the coordinates of points. Next, loop over all points of the input and insert a new point in the output with coordinates (x, y, 1+z*0.3)

Finally, replace the output points with the new points we created using the following:

The NumPy and VTK APIs can be mixed to achieve good performance. Even though this may seem a bit complicated at first, it can be used with great effect. For instance, the example above can be rewritten as follows.

Even though this produces exactly the same result, it is much more efficient because the for loop was moved it from Python to C. Under the hood, NumPy uses C and Fortran for tight loops.

If you read the Python Calculator documentation, this example is straightforward except the use of numpyTovtkDataArray(). First, note that you are mixing two APIs here: the VTK API and NumPy. VTK and NumPy uses different types of objects to represents arrays. The basic examples previously used carefully hide this from you. However, once you start manipulating VTK objects using NumPy, you have to start converting objects between two APIs. Note that for the most part this conversion happens without "deep copying" arrays, for example copying the raw contents from one memory location to another. Rather, pointers are passed between VTK and NumPy whenever possible.

Like the Python Calculator, the Programmable Filter can accept multiple inputs. First, select two or more pipeline objects in the pipeline browser and then apply the Programmable Filter. Then each input can be accessed using the inputs[] variable. Note that if the Output Dataset Type is set to Same as Input, the filter will copy the mesh from the first input to the output. If Copy Arrays is on, it will also copy arrays from the first input. As an example, the following script compares the Pressure attribute from two inputs using the difference operator.

Thus far, none of the examples used apply to multi-block or AMR datasets. When talking about the Python Calculator, you did not have to differentiate between simple and composite datasets. This is because the calculator loops over all of the leaf blocks of composite datasets and applies the expression to each one. Therefore, inputs in an expression are guaranteed to be simple datasets. On the other hand, the Programmable Filter does not perform this iteration and passes the input, composite or simple, as it is to the script. Even though this makes basic scripting harder for composite datasets, it provides enormous flexibility.

To work with composite datasets you need to know how to iterate over them to access the leaf nodes.

Here you iterate over all of the non-NULL leaf nodes (i.e. simple datasets) of the input and print them to the Output Messages console. Note that this will work only if the input is multi-block or AMR.

When Output Dataset Type is set to "Same as Input," the Programmable Filter will copy composite dataset to the output - it will copy only the mesh unless Copy Arrays is on. Therefore, you can also iterate over the output. A simple trick is to turn on Copy Arrays and then use the arrays from the output when generating new ones. Below is an example. You should use the can.ex2 file from the ParaView testing dataset collection.

Alternatively, you can use the MultiCompositeDataIterator to iterate over the input and output block simultaneously. The following is equivalent to the previous example:

Thus far, all of the examples discussed depended on the output type being the same as input and that the Programmable Filter copied the input mesh to the output. If you set the output type to something other than Same as Input, the Programmable Filter will create an empty output of the type we specified but will not copy any information. Even though it may be more work, this provides a lot of flexibility. Since this is approaching the realm of VTK filter authoring, a very simple example is used. If you are already familiar with VTK API, you will realize that this is a great way of prototyping VTK filters. If you are not, reading up on VTK is recommended.

Here, you added two columns to the output table. The first one has one value - minimum of RTData - and the second one has the maximum of RTData. When you apply this filter, the output should automatically be shown in a Spreadsheet view. You could also use this sort of script to chart part of the input data. For example, the output of the following script can be display as a line chart.

Changing the output type is also often necessary when using VTK filters within the script, which is demonstrated in the following section.

A curvilinear gris, for instance a bluntfin.vts from the ParaView testing data, is used as a good example. If you would like to volume render a subset of this grid, since as of 3.10, ParaView does not support volume rendering of curvilinear grids, you have two choices:

Note: See the next section for details about using a VTK filter within the Programmable Filter.

If you already applied, you may notice that the output looks much bigger than it should be because an important piece is missing. You need to use the following as the RequestInformation script:

VTK expects that all data sources and filters that produce structured data (rectilinear or curvilinear grids) to provide meta data about the logical extents of the output dataset before full execution. Thus the RequestInformation is called by the Programmable Filter before execution and is where you should provide this meta data. This is not required if the filter is simply copying the mesh as the meta data would have been provided by another pipeline object upstream. However, if you are using the Programmable Filter to produce a structured data with a different mesh than the input, you need to provide this information.

The RequestUpdateExtent script can be used to augment the request that propagates upstream before execution. This is used to ask for a specific data extent, for example. This is an advanced concept and is not discussed further here.

The previous example demonstrated how you can use a VTK filter (vtkProbeFilter in this case) from with the Programmable Filter. We will explain that example in more detail here.

There are two important tricks to use a VTK filter from another VTK filter. First, do not directly set the input to the outer filter as the input of the inner filter. (It is difficult to explain why without getting into VTK pipeline mechanics). Instead, make a shallow copy as follows:

The UnRegister() call is essential to avoid memory leaks.

This should be enough to get you started. There are a large number of VTK filters so it is not possible to describe them here. Refer to the VTK documentation for more information.