AMR Connectivity is performing a connected components algorithm over the data set (which is assumed to be AMR) where the components presence is determined by whether the volume fraction is above some threshold. This runs in parallel and the result will be a new field RegionID for every cell that specifies which connected region is belongs in. It performs this check independently for each material in the AMR to find each material’s separate Regions. Materials are already assumed to be separate from each other. For instance, say your volume consists of two materials and each of these materials only has one chunk of substance each. Then the Material 1 RegionID will be 1 everywhere the first material currently has volume and 0 everywhere else, same for Material 2. For data sets with more than one chunk the material, the region ID will vary from 0 to however many chunks there are.

Since all it does is add a field to the output data, there will likely be no visual change when running this filter. 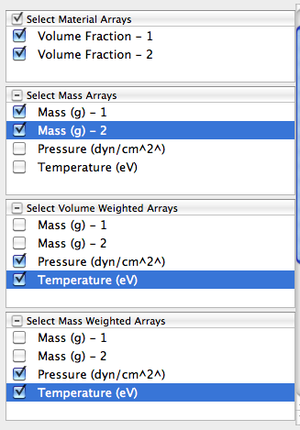 AMR Fragment Integration works based on the RegionID found in the previous filter. It iterates over all cells in the AMR data set summing together information belonging to a particular RegionID. At a base level, it'll find the total mass and total volume assigned to a particular RegionID. It can also find mass-weighted and volume-weighted averages for other field values across the region. In the end, AMR Fragment Integration creates a vtkTable where each row represents all values for a particular region and each column has a particular value for that region.

AMRContour finds water-tight boundaries of the fragments. This can be run independent of the RegionID, but it can also be used to color the RegionID on a fragment allowing visualization of RegionID value. It is also possible to use other contouring filters, such as CTHParts, to visualize fragments if water-tightness is not a necessary constraint.