ParaView recognizes file series by using certain patterns in the name of files including: fooN.vtk foo_N.vtk foo-N.vtk foo.N.vtk Nfoo.vtk N.foo.vtk foo.vtk.N foo.vtk-sN Where N is an integer (with any number of leading zeros). To load a file series, first make sure that the file names match one of the patterns described above. Next, navigate to the directory where the file series is. The file browser should look like this: 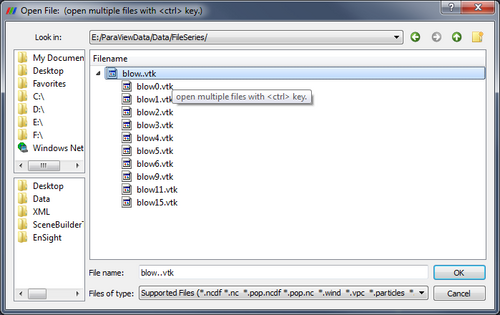 You can expand the file series by clicking on the triangle, as shown in the above diagram. Simply select the group (in the picture named blow..vtk) and click ok. The reader will store all the filenames and treat each file as a time step. You can now animate, use annotate time filter, do anything you can do with readers that natively support time. If you want to load a single step of a file series just expand the triangle and select the file you are interested in.

ParaView supports loading multiple files as long as they exist in the same directory. Just hold the ctrl key down while selecting each file, or hold shift to select all files in a range. 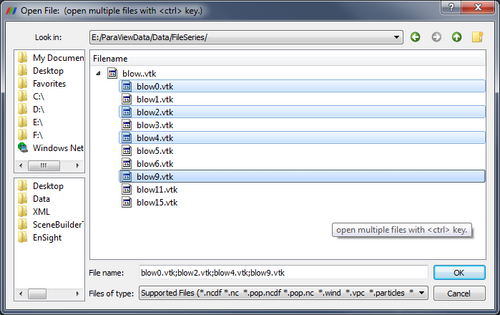 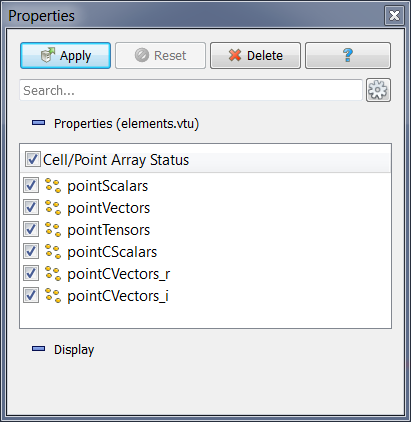 Once you have enabled all the options on the data that you are interested in click the Apply button to finish loading the data. For a more detailed explanation of the object inspector read the Properties Section