In ParaView, there are several ways to annotate the data to better understand or explain it. Several of the annotations can be interactively placed in the 3D scene. The parameters of the annotations are controlled using traditional user interface elements. Some types of annotation are discussed in other parts of this book. See the section on Selection for information about labeling selected points or cells in a data set.

on the Active Variables Control toolbar. When the data set selected in the Pipeline Browser is being colored by a variable (i.e., something other than Solid Color is selected in the Color by menu on the Display tab), this button is active. Clicking it toggles the visibility (in the selected 3D view) of a scalar bar showing the mapping from data values to colors for that variable. 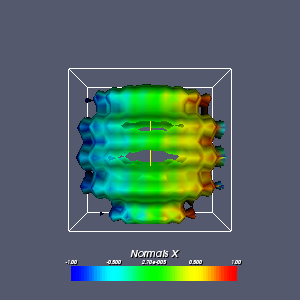 Clicking the Edit Color Map button to the right of the

Color Legend button brings up the Color Scale Editor dialog. As described in the Displaying Data chapter you have precise control over the mapping between data values and visible colors on the Color Scale tab of that dialog.

On the Color Legend tab, there are several different parameters that allow you to contol the appearance of the color legend itself. First is the Show Color Legend check box which toggles the visibility of the scalar bar (color legend) in the 3D view. This has the same effect as using the color legend visibility button. Below the Show Color Legend check button are the controls for displaying the title and labels on the scalar bar. In the Title section, the Text entry box specifies the label that appears above the scalar bar. It defaults to the name of the array used for coloring the data set. If the current data set is being colored by a vector array, the value of the second entry box defaults to specifying how the color is determined from the vector (i.e., X, Y, Z, or Magnitude). The entry box labeled Labels contains formatting text specifying the form of the scalar bar labels (numbers). The format specification used is the same as that used by the printf function in C++. 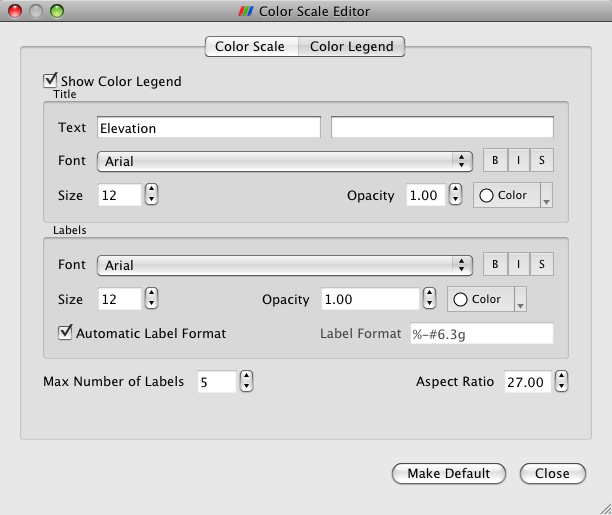 Below each of the Title and Labels entry boxes are controls for determining how the title and labels will be drawn in the display area. The leftmost control is a menu for choosing the font; the available fonts are Ariel (the default), Courier, and Times. Next are three formatting attribute buttons controlling whether the text is boldfaced, italicized, or shadowed, respectively. The next interface control is a spin box for controlling the text’s opacity. It ranges from 0 (transparent) to 1 (opaque).

At the bottom of this tab is a Number of Labels spin box. This determines how many scalar-value labels will be shown alongside the scalar bar. To the right of that is an "Aspect Ratio" spin box which allows you to make the scalar bar relatively thinner or thicker.

When interacting with data in ParaView, it can be difficult to determine how the data set is oriented in 3D. To remedy this problem, a marker showing labeled 3D axes (i.e., orientation axes) can be displayed. The orientation of the axes matches that of the data, and the axes reorient themselves as the camera is rotated about the 3D scene. 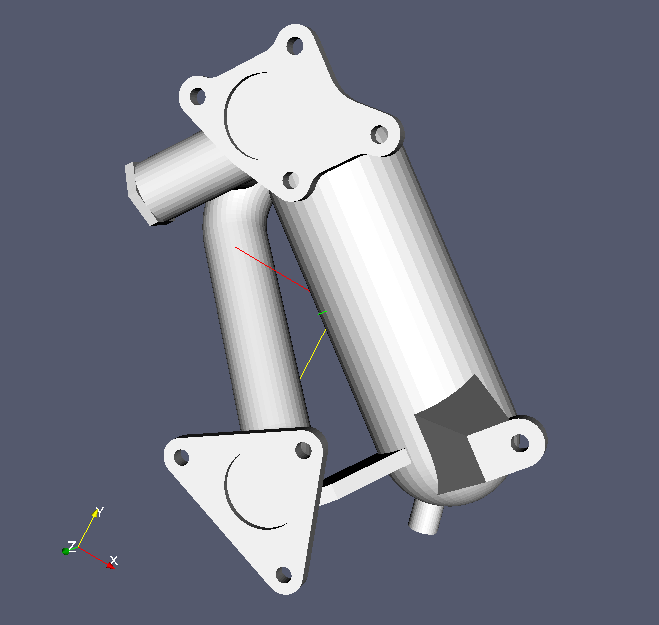 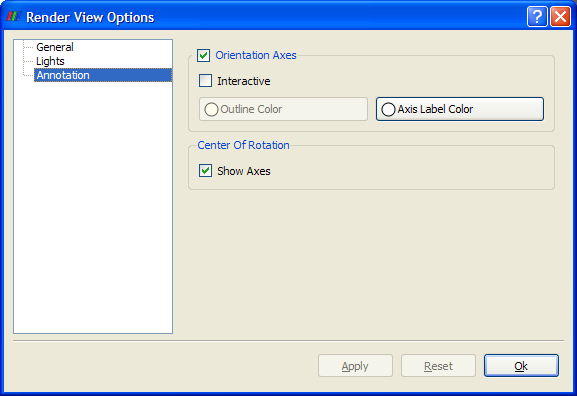 On the same dialog box you also have control over whether or not the center of rotation should be annotated. This annotation demarcates the location in space about which the camera rotates. ParaView uses the center of the initial data set loaded into the pipeline as the default value. You can control this placement and display of the center of rotation display via the Center Axes Control" toolbar (View menu, Toolbars, Center Axes Control. If you need to specify an exact coordinate you may do so via the Adjust Camera dialog exposed by the righmost button on the left set of buttons above the 3D view.

Often users want to display additional text in the 3D view (e.g., when generating a still image or an animation). In ParaView, there are a variety of ways to do this, all through the use of sources and filters. The Text source displays 2D text in the 3D scene, the 3D Text source does the same for 3D text, and the Annotate Time filter shows the current time using a text annotation in the 3D view.

The Text source allows you display arbitrary 2D text on top of a 3D view. It is available from the Sources menu. On its Properties tab, enter whatever text you wish to be displayed in the Text entry area, and press the Apply button.

Once the text has been added to the 3D view, you can reposition it within the view by left-clicking and dragging the text. (A bounding box will be displayed around the text.) By default, the text is displayed in the lower left corner of the 3D view.

The Display tab in the Object Inspector for the Text source is different than for most other sources and filters displayed in the 3D view. Specific controls are given for positioning the text and setting various font properties. 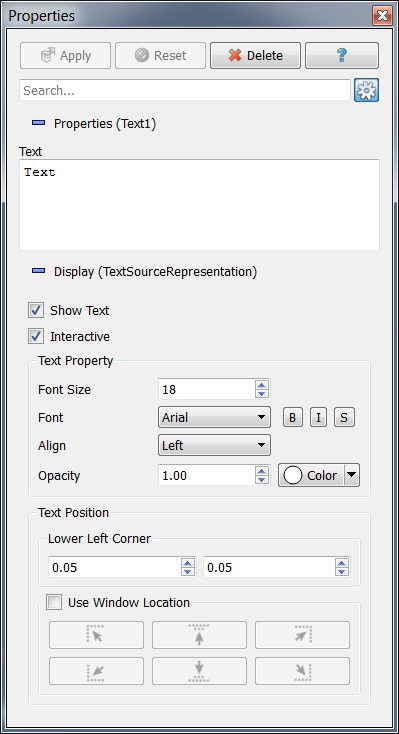 The first check box, Show Text, toggles the visibility of the text in the 3D view. This corresponds to the eye icon in the Pipeline Browser for this source. The Interactive check box below it determines whether the text may be interactively repositioned by clicking and dragging in the 3D view.

The Text Property section of the Display tab allows you to specify various parameters relating to the font used for displaying the text. The Font Size spin box determines how large the letters in the text will be. The Font menu determines which font type will be used: Ariel, Courier, or Times. The three buttons beside this menu indicate whether the text will be drawn boldfaced, italicized, and/or using shadows. The Align menu specifies whether the text will be left-, center-, or right-aligned within its bounds box. The Opacity spin box determines how opaque the text appears. An opacity value of 0 corresponds to completely transparent text, while an opacity value of 1 means completely opaque text. The Color button beside the Opacity spin box allows you to choose a color for the text.

The Text Position of the Display tab is used for specifying exactly where in the 3D view the text appears. If Use Window Location is unchecked, then the Lower Left Corner section is active. The two spin boxes provided determine the X and Y coordinates of the lower left corner of the bounding box of the text, specified in normalized coordinates (starting from the lower left corner of the view).

If Use Window Location is checked, then the six buttons in that section of the interface become available. They allow you to choose various locations within the view for anchoring the text. Using the top row of buttons, you may place the text in the upper left corner, in the top center of the view, or in the upper right corner, respectively. The bottom row of button behaves similarly for the bottom portion of the 3D view.

You can control the placement of the 3D Text in two ways. First, the Display tab for all sources and filters shown in a 3D view have controls to position, translate, rotate and scale the object via textual controls. It is often easier however to use a the Transform filter for the same purpose. The transform filter allows you to drag, rotate and scale the object via either the 3D widget in the scene or via the text controls on its Properties tab.

The Annotate Time filter is useful for labeling a time-varying data set or animation with ParaView’s current time in a 3D view. It is drawn as a 2D label, similar to the output of the Text source. The Properties tab for this filter provides a single text box labeled Format. From this text box, you may specify a format string (printf style) indicating how the label will appear in the scene. As with the output of the Text source, this label may be interactively repositioned in the scene. The Display tab for this source is the same as the one for the Text source; it is described earlier in this section. 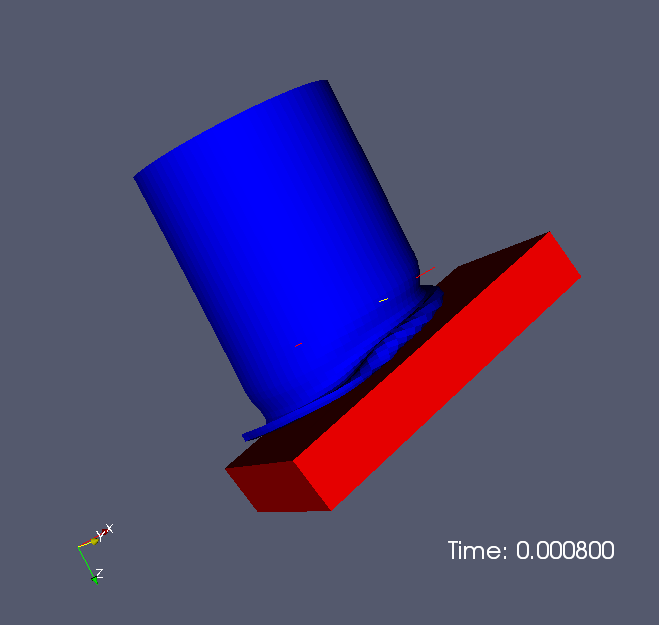 Figure 8. Using the Annotate Time filter to display the current time in a time-varying data set
Retrieved from "https://public.kitware.com/Wiki/index.php?title=ParaView/Users_Guide/Annotation&oldid=36854"