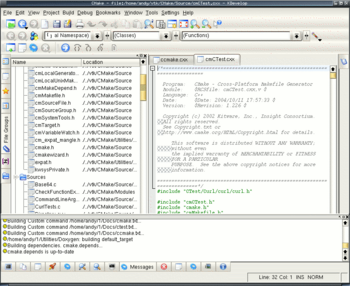 KDevelop3 is in alpha state, so use it carefully. Available in CVS as of October 12th 2004. Currently only reported to work in KDevelop 3.0.4.

Beside creating all the same files as UNIX Makefile generator, it creates in the toplevel binary directory files:

The first one is XML describing the project, while the second one is a list of relative paths to the source files. The source files are grouped based on globbing expression in the XML file.

Alex Neundorf wrote a patch for CMake ( http://www.cmake.org ) that adds KDevelop generator for CMake. What this means is that CMake can generate project files for KDevelop.

That said, we ran into a bit of trouble. The problem is that so far we could not figure out a way for sources to be in one directory and all build files being in another. That includes all KDevelop files.

Why is this good? Well, several reasons. First one, to remove all the build files (generating tar, doing CVS etc, start all over), all you do is to remove build tree. Also, sometimes sources are located in a readonly partition (such as CD-ROM, /usr/share/doc/... etc). Another problem is when you use the same source tree for different build trees. In that case, the source has to provide all KDevelop files, which may not be acceptable.

So, I played with the Alexes patch and managed to get it working by doing the following:

So, it worked fine with couple of problems.

1. Write Project.kdevelop.filelist to source tree and point projectdirectory to the source tree

To compile your project on the command line using the one-year free Visual C++ 2005 Express Edition, you can generate NMake Makefiles with CMake, and then use nmake.

To use the free compiler, 'Visual C++ Express Edition' and 'Microsoft Platform Software development Kit (SDK)' have to be downloaded and installed separately. The batch file for the 'Visual Studio 2005 Command Prompt' must be update to include the path, the include directory, and the libraries for Microsoft Platform SDK.

Download VC Express *and* Platform SDK from http://www.microsoft.com. Install them in C:\Program Files. The license expires one year after your start using it.

Create a batch file called 'VS8_Command_Prompt.bat' in your home directory (for example in C:\cygwin\home\my_username\Bin). Edit this file and type:

Create a Windows shortcut called "VS8_Command_Prompt" in your Desktop. Right click and go to Properties. Edit the shortcut tab (replace x86 with amd64, x64, ia64, x86_amd64, or x86_ia64 depending on your processor type):

Double-click on your VS8_Command_Prompt shortcut. Go to your build directory.

Use CMakeSetup.exe (replace 2.2 with your CMake version number)

Set the CMake variables, click 'Configure', and then 'Ok'.

Check you have a Makefile in your build directory. In the VS8_Command_Prompt, and type:

Your project should compile now.

NOTE: This information is mostly obsolete in light of the release of Visual Studio Express C++ by Microsoft

The debugger and libraries that come with the $99 Standard Edition of Microsoft Visual C++ .NET 2003 are sufficient for most C++ developers' day-to-day work. Their primary goal is to build their stuff with debug info for their own consumption only. Sometimes, though, a developer needs to build an optimized version, for example, in order to reproduce a bug that only occurs in optimized builds.

So... the combination of the two gives the best of both worlds, still at the reasonably low price of approximately $99 USD. (The debugger and its UI elements alone are well worth this price.) Check the license agreements to make sure that your use of the Standard Edition and the free Toolkit are both valid within the scope of their respective licenses.

Visual Studio itself can be fixed so that optimizations work from right within the IDE. Then it will work just like the "Professional Edition", which means you can use the normal Visual Studio generator. You won't get any warnings about This edition of Visual C++ does not support the optimizing compiler or anything like that.

(Note to wiki admins: I wanted to place the direct links here, but the dumb spam filter wouldn't let me)

Both Visual Studio and the Visual C++ Toolkit come with their own "Command Prompt" shortcuts. The trick to combining them is to make your own command prompt shortcut that simply configures itself using a batch file which calls each of the other batch files. If you look at the vsvars32.bat and vcvars32.bat files referenced below, you'll see that they simply set up some environment variables. Most importantly, they prepend their own relevant choices to the PATH, INCLUDE and LIB environment variables. Since they both prepend, the last one called "wins."

Create your own batch file "CombinedVSCmdPrompt.bat" and add the following commands to it:

When you double click this shortcut, you should be all set to invoke CMakeSetup.exe from it (to use CMake's GUI) or to invoke cmake.exe directly (to use the command line tool) to configure and generate your make files. This technique works when using the "NMake Makefiles" generator for either Debug or Release build flavors when cmake or CMakeSetup is invoked from this special hybrid command prompt that you've created.

Always invoke CMakeSetup, cmake and nmake from this hybrid command prompt when using this technique. If you invoke CMakeSetup through a shortcut, it will not have the special environment that you've carefully set up here and it will not use the optimizing compiler in the generated make files.

You can use either "NMake Makefiles" or "Visual Studio 7 .NET 2003" generators for Debug builds.